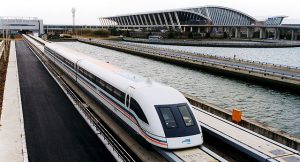 OSCAR is keen to increase community awareness and encourage debate on issues impacting on the Sunshine Coast. Transport options are one area of great interest.

Accordingly we have invited a representative of American Maglev Technologies to provide us with a presentation on their technology.

The Caboolture to Maroochydore Corridor Study (CAMCOS) project was first mooted by the Queensland State Government in the mid-1990s and proposed a passenger rail service branching off the North Coast railway line at Beerwah and extending through Caloundra to Maroochydore.  The objective of the project was to provide a public rail transit spine for the Sunshine Coast and link the coastal urban area to the major northern rail line and to Brisbane.

The initial study was completed in 2001 and included the option of extending the service beyond Maroochydore to the Sunshine Coast Airport.

The then State Government agreed to implement the positive recommendations of the study.  Subsequently, a succession of State Governments has expressed commitment to the project, reflected in action taken to protect the preferred future public transit corridor from Beerwah to Maroochydore and on to the Sunshine Coast Airport.

The Beerwah-Maroochydore rail link was also retained as a key action in the delivery of an integrated transport network for S-E Queensland in the 2011 Connecting SEQ 2031 – An Integrated Regional Transport Plan for South East Queensland report (p. 47).  There are frequent additional references throughout the report alluding to the critical importance of this rail connection.

Further repeated reference has been made by the State Government to the need for the CAMCOS rail line from Beerwah to Maroochydore.  Continued work on the project by TMR and ongoing protection of the corridor would indicate that it remains an infrastructure and service priority.

It is noted that the 2001 CAMCOS study report supported a heavy rail option for the Beerwah-Maroochydore connection.  Under contemporary circumstances, however, the heavy rail option has substantial capital cost disadvantages when compared to other transit technologies.  In addition, with the interim growth of a range of residential areas and other community facilities adjacent to the reserved corridor the development of a heavy rail system in the current environment is likely to attract significant objection and disruption both during construction and operation.

To overcome these factors alternative technologies need to be considered;  Light rail is one widely discussed option, Maglev (magnetic levitation) rail could be another.