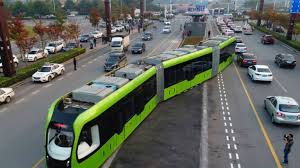 OSCAR would like the following set of questions to be considered by Council as part of community consultation as this project progresses.

Note: We will add to this list of questions as more information emerges.

While the “benefits” of light rail would be predominately realised by people living on the enterprise corridor between Maroochydore and Caloundra (putting aside that this will be at the cost of higher density development in the corridor) and visitors, how do other areas of the Sunshine Coast benefit?
People in Coolum (or Peregian Springs, Dulong, Mapleton, Montville, Maleny, Nambour etc etc) will undoubtedly be required to contribute to funding light rail (probably through an increase in the Transport Levy) without any direct benefits. Keep in mind that the Gold Coast City Council has contributed $250 million to their light rail and also continues to subsidize its annual usage at significant cost.
Is someone living in Coolum (as an example location) going to drive to Maroochydore, find a paid parking spot in order to catch the light rail? What destination would make this sensible (perhaps other than SCUH). Will tradies use this to cart their tools around? We are unsure what the Council sees as the target demographic for light rail.

On 20 August three SCRC Councillors (Crs Jamieson, Landsberg and Cox) voted against Cr Natoli’s Notice of Motion (NoM) calling for community consultation before the Mass Transit Project proceeds any further. It is also clear that Cr Baberowski would have voted against the NoM had ill health not prevented him for being in the meeting; this assumption is based on the comments Cr Baberowski made at the 27 August Special Meeting where he described Cr Natoli’s motion as “flawed, biased and unnecessary”.

Given the NoM was a simple one calling for timely community consultation is it hard to see how it could be said to be biased and flawed. Clearly, 7 of our Councillors had no issue with supporting it.
OSCAR is intrigued as to what changed in the 7 days between the two meetings to result in a unanimous vote to confirm what Cr Natoli had sought the previous week. Perhaps those opposed to community consultation on 20 August had an epiphany based on the strong community support for Cr Natoli’s call?
The upshot, however achieved, was a good outcome for the community and OSCAR will be strongly advocating to Council to ensure the community consultation is robust, genuine and provides the community sufficient time to digest the considerable information that underpins the Mass Transit Project and 𝗛𝗔𝗩𝗘 𝗜𝗧𝗦 𝗦𝗔𝗬.

See the statement below from SUNSHINE COAST LIGHT RAIL SHAPING OUR FUTURE [known as the Hassell Report – 2014, page 40] to confirm what developers want. 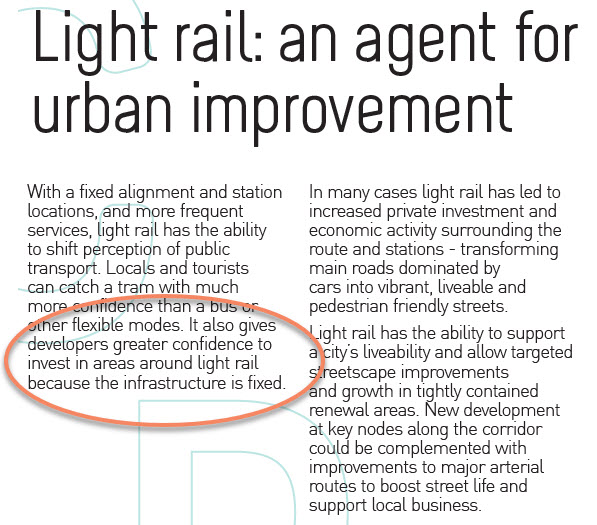 The Integrated Transport Strategy (page 9) makes it clear what the Council expects them to pay – NOTHING!

A Council document that suggests what the intent of the Mass Transit/Light Rail Project is concerning high density development. 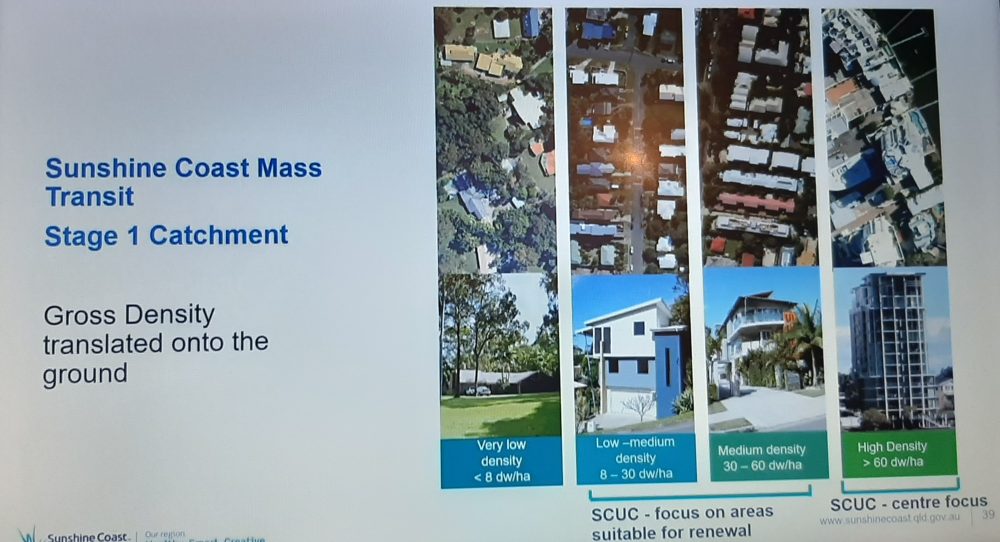 There is a likelihood of high-density development in residential areas where this could not currently occur under the existing Planning Scheme.

Council documents such as the Transport Priorities Map (updated June 2019) make it clear what the intent of the Mass Transit/Light Rail Project is concerning high density development.

We acknowledge that the purpose of a business case is to advocate for funding for the Sunshine Coast’s preferred mass transit solution but where is this funding likely to come from?

The most likely funding source in situations like this would normally be the State Government but given the political reality of who holds our state seats, it is hard to see funding light rail being a high priority for either the ALP or LNP.

Even if such funding was forthcoming it almost certainly requires some contribution from the Council itself.

In the case of the Gold Coast City Council which received funding from both the State and Federal governments for its light rail project, it has still been required to make considerable financial contributions to Stage 1 ($120 million) and Stage 2 ($55 million) and its contribution to Stage 3 is projected to be $92 million.

Is the SCRC planning for a financial contribution of this scale and if so what is it prepared to commit and will it funded via borrowings?

The Disclaimer at the beginning of the PricewaterhouseCoopers Australia (PwC) Report gives rise to concerns about its independence. We note that “the analysis contained in this report has been prepared by PwC from, inter alia, material provided by, and discussions with SCC and third parties”. The Disclaimer goes onto to state “no verification of the information has been carried out by PwC …”.

These statements give rise to a number of additional questions:

What were the Terms and Conditions contained in the consultant agreement between SCRC and PwC concerning the Sunshine Coast Mass Transit (SCMT) Preliminary Business Case (PBC)?

What information did the SCRC, and the third parties listed in the Disclaimer, provide to PwC?

What is meant by the statement that “No verification of this information has been carried out by PwC”?

The Council’s Integrated Transport Strategy (ITS, 2019), Figure 1: Priority transport projects on page 9 shows that no funding responsibility is attributable to the Private sector even though this sector stands to gain considerable windfall profits from any rezoning that will occur to facilitate increased density within the transport corridor.

There has been a lack of contemporary community engagement since very dated previous consultation which did not address many of the key issues that have emerged from the recent PwC Report.

There has been no public discussion on infill/densification issues that have emerged with this project as it has morphed from a public transport initiative to one that is about urban transformation. No recent consultation has been undertaken and we suspect none is planned until after the $15 million business case has been submitted to the State Government.

The most recent reference to community consultation was at the SCRC’s OM of 30 January 2020:

We note that the Council has several excellent strategic documents on community engagement including the policy itself, an Engagement Framework and Engagement Toolkit which could be applied to meaningful community consultation on this Project.