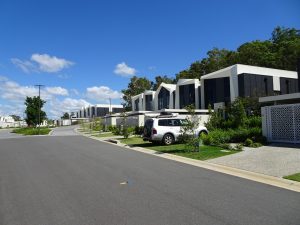 OSCAR was invited to attend the Verge Parking Workshop held at the Lake Kawana Community Centre on Monday, 12 February 2018.

There were a number of presentations and speakers – and lots of information to take in. The organisations represented – the council itself, community organisations, representatives from the utility companies and the business/developer sector – were all given the opportunity to express their views and ask/answer questions.

Community groups/organisations made a huge contribution to the day and their views were listened to in a respectful manner.

Two police officers attended the workshop but did not give a presentation or participate in discussions which was interesting given the role the police play in traffic and parking regulation, along with the Council.

The workshop was well run and certainly involved a two-way exchange of ideas. The Council certainly did not dominate the proceedings.

I was accompanied, as part of the OSCAR team, by Gillian Hall (Dulong Futures) and Bob Joubert (Peregian Springs Residents Association) and their thoughts of the day are included below. I am very grateful for the contribution of both Gillian and Bob to the success of the day.

It should be pointed out that this is not a definitive account of all items on the Agenda.

Verge parking is not an isolated issue and the workshop provided the opportunity to put much more on the table. To prepare and plan for the potential of 200,000 more people living on the Sunshine Coast in future, maybe it’s a good time to address the causes rather than the symptom?

OSCAR’s chief recommendation, coming out of the workshop (which was intended to be for the sharing of information; I do not believe anyone present thought this issue would be solved in one day!), is that the Council set up a Consultation Group involving all stakeholders to arrive at a position that can be the basis for Council policy in the future. The Maroochy River Estuary Consultation Group in 2017 shows how effective such a process can be.

The problem is bad and getting worse. SCRC now has more dwellings per hectare than before; more residents (especially drivers) per dwelling than expected; more vehicles per kilometre of residential streets; no extra on-site parking to cater for extra vehicles (and if residents don’t use garages for their vehicles, the problems get even worse).

Road widths are a major factor. Existing subdivisions are stuck with the built streets, which include “neighbourhood collectors” (7.5m wide); “access streets” (6m wide) and “access places” (5.5m wide – mainly dead ends). Most issues and complaints seem to arise in 6m wide access streets, especially where narrow lot fronts (eg 10m) and “secondary dwellings” lead to higher densities of residents and vehicles than planners in Council and State Government might have expected.

The major points that I noted, mainly from Jamie Simmonds’ summary (Jamie was the independent facilitator engaged by the Council) and subsequent comments from participants were:

There is a genuine problem with verge parking in the SCRC area. Solutions won’t satisfy everyone under all conditions. Any proposals to change current regulations, or penalty enforcement practices or urban design standards will need to address numerous issues, including:

Some short-term and long-term actions that could help with solutions include:

I guess my major takeaway was the commitment by Mayor Jamieson and the other councillors to maintain an ongoing dialogue with the community on this subject – having started with this very good workshop. They deserve credit for that and it’s a pity that recent comments in the Sunshine Coast Daily were angled more towards controversy and confrontation.

Purpose: The workshop will provide an opportunity to generate a comprehensive perspective on the current legislative framework for unlawful parking; the impacts and implications for a range of service and utility providers; key data and statistics on parking management including a comparison with other similar Councils; public access and safety issues; and the expectations and views of the community business and industry.