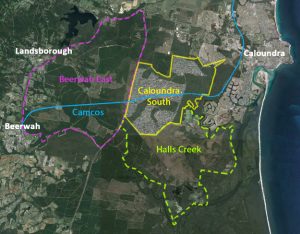 CONFLICT has arisen over whether or not agricultural land should be developed as an addition to the Coast’s new super suburb.

ShapingSEQ was released by the State Government on Friday to define south-east Queensland’s future progress and what roles the Sunshine Coast and Noosa regions would have in that.

Caloundra South, Beerwah East and Palmview were identified as major areas of development expansion to accommodate the 191,000 people expected to live on the Coast by 2041.

Further to those, the plan described Halls Creek, which adjoins Caloundra South, as a potential growth area after 2041.

Caloundra South is being developed to hold 20,000 new homes.

The plan doesn’t fit with Sunshine Coast Council’s wishes for the area to be part of an undeveloped nature break.

But the government wants to protect the area’s future development potential.

“These areas are located… to limit development and protect them from further fragmentation that would prejudice their ability to accommodate future urban development,” the plan read.

A spokesman for Deputy Premier Jackie Trad said the suitability of Halls Creek to accommodate future urban growth would depend on a range of matters including the SEQ Growth Monitoring Program and further investigation to determine the suitability of the site.

He said he was concerned about the potential environmental effects development would have on the Pumicestone Passage.

“We have clearly demonstrated that Halls Creek is not suitable to accommodate urban growth – now or in the future,” Cr Jamieson said.

“We do acknowledge however, that it has been downgraded somewhat in this regional plan and that the plan makes it clear that there is no commitment or implication that all or any part of the site will be made available for urban development in the future.”