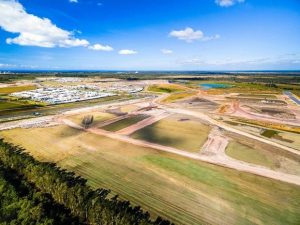 The new business park is one of two to be built at Stockland’s $5 billion Aura estate at Caloundra South.

The first business park being developed will be home to more than 3000 new jobs upon completion, with the second one to hold about 2000 new jobs, taking the employment creation of the two business parks to around 5000 permanent jobs.

Adjacent to the Bells Creek Arterial Rd and well-connected to the Bruce Hwy, the business park is set to accommodate multiple uses, including light industry and manufacturing, bulky goods and showrooms, commercial office space, storage and warehousing, research and development and indoor sports and recreation.

“The launch of the $222 million Aura business park is an important part of our national Logistics and Business Parks strategy.”

The early stages of the development will include a “construction cluster” which will target trade-related businesses, as well as a showroom precinct and office park.

Stockland’s general manager for Queensland operations Kingsley Andrew said the business park’s deliver so early in the life of the project was designed to enable Aura’s early residents to work close to home.

“Valued at more than $2 billion, the L&BP business now represents 15 per cent of Stockland’s total assets, and occupancy has increased to 99 per cent across the portfolio,” he said.

That $60 million estate was taken to market by Economic Development Queensland and about 2500 people were expected to be employed there by the time Stage 1 was built out.

The Sunshine Coast Industrial Park was constructed on a 215ha site, with 73 lots created across 78ha of developed, greenfield industrial land.