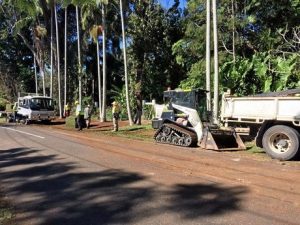 VERGE garden beds have been removed from Buderim Food Street in the wake of negotiations between the local residents and the Sunshine Coast Council.

A bobcat was this morning brought in to remove dragon fruit, nasturtiums, and a ground garden plot on the nature strip outside a home on the corner of Wyndlorn and Clithero Ave, and turf is about to be laid.

It’s understood the property belonged to the same people whose citrus trees were recently removed, and who have not obtained the required permit, which the council is now offering to residents with existing verge plots for free.

Food Street resident and advocate Ali Kuylaars said the move to “tidy up” the street did not come as a shock.

“Council have been very clear about their obligations under current local laws and what that means for verge gardening.

“They have offered an abeyance on insurance, which was a really exciting step forward, but they haven’t been able to do the same with permits.

“The permits were still necessary in order to make verge planting lawful, and I believe those owners weren’t prepared to apply for a permit or negotiate with council about that process.”

Police officers were present as workers cleared the site, but few people remained in the street.