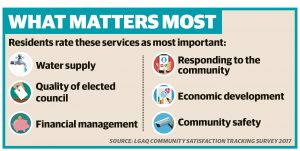 QUEENSLANDERS do not think their councils are doing enough to respond to community concerns, new research reveals.

In a Local Government Association of Queensland survey, residents rated response to the community as the worst performing area for councils across the state.

Those surveyed also said only water supply was more important than the quality of their elected councillors. But they are not convinced elected officials are performing to their expectations.

The two-yearly survey asked 700 Queenslanders to rate how important they found council duties on a scale of one to five, with one the lowest and five the highest. They were then asked to rate their council’s performance on the same scale.

The survey found respondents rated the importance of quality elected councillors “important”, but their performance as “fair only”. Those surveyed rate councils’ response to community concerns at 3.05 the lowest of any category and lower than the 3.33 received in 2015.

But the survey said statewide satisfaction with overall council performance remains close to the high watermark set at the 2015 survey.

LGAQ chief Greg Hallam acknowledged respondents were concerned about how councils communicated and responded to the community.

“This isn’t a new concern, this has been a challenge for as long as we’ve been doing these surveys,” he said.

“People aren’t worried about town plans until they affect their street or their neighbourhood. So that’s a challenge that councils have to manage.”

Mr Hallam said the high-profile scandal regarding former Ipswich mayor Paul Pisasale and Crime and Corruption Commission investigations into the 2016 council elections and the Fraser Coast council had affected how voters saw councillors.

“It has had an impact, that’s the truth and it’s something we have to deal with,” he said.

“But it only brought those areas back to the average they haven’t gone below that.”

The CCC is investigating allegations of corrupt conduct in the Fraser Coast council and the conduct of some candidates in the Gold Coast, Moreton Bay, Ipswich and Logan councils during the 2016 elections.

The survey found 69% of respondents statewide approved of their council’s performance, almost identical to 2015’s 70.96%

Fringe metropolitan councils – including Ipswich, Logan and Moreton Bay – were among the best performers in the 2015 surveys with a 73.7% rating. But they dropped back to the statewide average in this survey, receiving a 69.2% performance rating in this survey.

Satisfaction with regional city councils dipped from the peaks of 70.89% in 2015 to 69.2% this year, in line with the statewide average.

The biggest increase in performance satisfaction was in rural councils which increased from 65.95% in 2015 to 68.6% in this survey the best result the category has received since amalgamation.

Mr Hallam said the study showed across Queensland ratepayers were on average happy with how their councils were performing.

“We are very close to the long-term average of this study. All the categories of councils are on the same level.

“The rural council category has never been the highest performing category but for the first time it’s close to the average.”

Neither the Ipswich nor Fraser Coast councils responded to requests for comment.