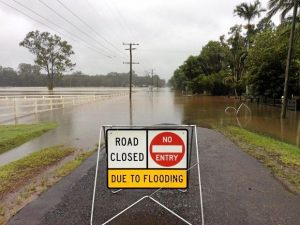 The Sunshine Coast received a taste of the future normal for low-lying coastal communities everywhere when, in the middle of a drought-like winter, water flooded through storm water outlets and over the top of revetment walls and onto key streets across the region.

The cause wasn’t an intense east coast low, a cyclone or intense rain event normally associated with flooding of low-lying areas across the region.

If it had occurred during daylight, particularly at peak hour, Mooloolaba would have been left grid-locked and Bradman Avenue, Maroochydore, reduced to one-lane along the river.

Twin Waters residents would have seen water up into the parks and footpaths along Twin Waters Drive and the river spilling into bushland for more than 100 metres along Nojoor Road.

At Caloundra the vulnerability of Tay and Maloja Avenues at Bulcock Beach would have been fully exposed.

What occurred required no more than a couple of days of strong southerly winds blowing up the NSW and Victorian coasts to set off the Ekman Transport Effect which lifted the Highest Astronomical Tide for the season at Mooloolaba from 2.03metres by additional 0.4 of a metre.

While for many the resulting impact of that degree of sea level rise went largely unnoticed, scientists at the University of the Sunshine Coast and hydrologists took note.

They are in agreement that Monday night’s short-term increase in sea levels afforded a glimpse of the future impact of the best-case 0.8 metre permanent rise now locked in by 2100 because of climate change.

The Ekman Transport Effect refers to the shift leftward that occurs when sustained winds blow in a consistent direction over the ocean moving the top 30m layer of water.

The resultant upwelling is most likely to occur along New South Wales, south-east Queensland and the Bonney Coast (South Australia) coastlines.

Professor Tim Smith, director of the University of the Sunshine Coast Sustainability Research Centre, says the region has received a wake-up call in terms of what it needs to prepare for.

“We are pretty lucky it was not combined with other things to intensify the situation like a low-pressure system or a high-intensity rainfall event or it would have been a much more devastating outcome,” Prof Smith said.

“We have to think about the design and placement of infrastructure and assets. We can’t continually defend and protect ad infinitum.

“Alternative adaptation strategies will be needed.”

He says the options are limited.

The first is to try to protect assets without changing their location.

Professor Smith said the approach was the emphasis of local authorities across Australia who don’t want to change but preferred to protect investments made in calm weather 40 years ago.

He said the problem was that the environment was not static and could not be controlled.

The second strategy was to accept there were going to be impacts and to retrofit existing settlement and infrastructure to experience less damage.

“You could raise houses to protect from periodic impacts if you were willing to live with them,” Prof Smith said.

The other option was to retreat in the process relocating settlement and assets out of harm’s way.

“That’s a taboo subject, he said. People don’t want to talk about it but eventually we will need to have a serious discussion.”

Hilo in Hawaii, Grantham in Queensland’s Lockyer Valley and Twin Rivers in New Zealand all provide limited examples of communities that have bitten the bullet and shifted their communities out of harm’s way.

“The longer we leave it the more difficult it will become. The sooner we act the better.”

He says the danger of protecting assets is that the protection gives confidence to put more in harm’s way, doubling the risk.

He takes issue with the failure of governments to be explicit about the planning time horizons of capital spending.

If it’s 20 years it doesn’t matter. Longer than that may become problematic.

What won’t cut it is a piecemeal response to climate change.

Issues needed to be considered holistically with things like private property rights, asset valuation and taxation structures included in the discussion.

He said discussions needed to be had now about the future we want and what was required to achieve it.

“I’m optimistic people will be able to create the change we need,” Prof Smith said.

“We live in a representative democratic system where people have the ability to influence decision makers.”

Damian McGarry, of the Mooloolaba-based consultancy Hydralogic, agrees that Monday night’s event gave a glimpse of what he says might be business as usual when sea levels rise permanently.

But his view is that change will occur incrementally until the level of frequency of what would begin as mild inconvenience reaches the point of dysfunction through the loss of amenity and access.

Mr McGarry said in the Sunshine Coast’s well-established communities, infrastructure including drainage and roads were locked in, including 80% of floor levels.

“It’s unlikely councils will be able to continue to offer the same standard of service, access and drainage,” he said.

“That’s not practical. You can’t raise the roads and drainage pipes above ground nor can you have full perimeter bunding.”

Councils would be unable to physically protect infrastructure or to financially sustain standards of service.

He said those standards currently dictated everything but would have to be redefined as they came into conflict with changing climatic parameters.

Mr McGarry said planning schemes would also need to include recognition of all factors relating to a piece of land so that people investing in lifestyle or business did so in an informed way.

But he suspects greater awareness of the impacts would cause no more than a 24-hour blip in real estate values.

“Changes is functionality will sneak up on us like a frog in boiling water,” he said. “In 30 or 40 years people will be saying a tide never used to come over a park or flood a road.”

Mr McGarry’s view was that people would become more resilient and accepting of the growing inconvenience.

He believes fundamental step change may only occur through a severe weather event with sea level rise that saw buildings destroyed.

In the meantime as an example improved resilience could be introduced by blocking the reverse flow of stormwater pipes and raising footpath levels along Bradman Ave to create a subtle levee wall.

Ultimately though he expects the desire to live near the coast may be offset by the lack of functionality.