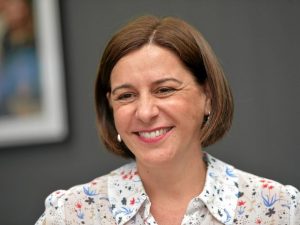 OPPOSITION leader Deb Frecklington would back the election stands by her Sunshine Coast colleagues against planning changes at Yaroomba and a casino for the Maroochydore CBD.

And she has made clear she would hold Labor and Premier Annastacia Palaszczuk to account to deliver infrastructure critical to the region’s projected population growth.

Ms Frecklington, who was shadow infrastructure minister in the last Parliament, said the LNP has done the government’s homework on what was required for the Sunshine Coast and would expect it to deliver on the region’s needs.

She said population growth projections were an issue on the Sunshine Coast, in Brisbane and its outer suburbs and were one of the reasons she had appointed Glass House MP Andrew Powell as shadow planning minister.

“He and I will get over the issues and hold the government to account,” Ms Frecklington said.

She said she would back local Members as the voice of the community. That applied to both Maroochydore MP Fiona Simpson’s call for proposed development at Yaroomba to stay within the planning scheme and the collective LNP opposition led by Kawana MP Jarrod Bleijie and Federal Fisher MP Andrew Wallace opposing a proposed casino in the Maroochydore CBD.

The former solicitor and mother of three said the 2017 state election had made the Sunshine Coast an LNP strong hold with the party now holding seven of the region’s eight seats precisely because it had done its homework with costed and planned policies that reflected its infrastructure needs.

She said the support for the LNP here was overwhelming because it recognised the Coast as an important region and its was now up to Labor to deliver.

Ms Frecklington said the Palaszczuk government needed to recognise there were regions beyond the Brisbane CBD.

She said the government had shown no indication it recognised that during her time as shadow infrastructure minister with rail duplication simply not part of its narrative.

Despite the LNP’s history which has seen seven changes to its leadership since 2008 compared to just three by Labor, Ms Frecklington said she was confident she would survive a mid-term ‘assassination’ and still be at the helm at the next election in October, 2020.

“I genuinely believe I can straddle the divide between city and country and unite Queensland,” she said.

“Tim Mander and myself are proud LNPers. I’m a proud LNP member. This leadership team is a fresh start.

“I think I can successfully lead for the full term.”