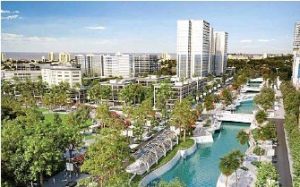 The SCRC Mayor outlines his vision for the Sunshine Coast region in 2018 in the article reproduced below.

OSCAR supports much of what the Mayor is saying but would qualify this support by saying:

OSCAR remains committed to working with the Council, in 2018 and beyond, to achieve the best outcomes for our region – ones that better balance the needs and aspirations of the existing Sunshine Coast community with those of future residents.

Game-changers to take shape in 2018

So if 2017 failed to deliver on any of his hopes and dreams, the mayor of the Sunshine Coast isn’t dwelling on it.

“I don’t do disappointments,” Mr Jamieson says when the subject arises.

“There’s always lessons to be learnt and ways to do things better, but I don’t focus on the disappointments.

“For me, it’s about seeing where the opportunities are and continuing to strive for the outcomes we desire.”

But when achievements are the topic, Mr Jamieson has a list he is happy to talk about.

There’s the year-long celebration of the 50th anniversary of the naming of the Sunshine Coast, completion of the solar farm and opening of the Rainforest Discovery Centre at the Mary Cairncross Scenic Reserve.

Add to that the Sunshine Coast Lightning’s success in the inaugural Suncorp Super Netball championship, expansion of the region’s protected environmental land and improved community and employment confidence and Mr Jamieson is happy to call 2017 a successful year.

However, he believes the real game-changers are still in the development phase and will continue to be throughout 2018.

One of the most exciting, he says, is the new Maroochdyore CBD, Sun Central, where the groundwork is being laid for an exciting, hi-tech future.

While it still looks like the giant construction site it actually is, he says a “hell of a lot” of civil construction work has been done to provide services and technology that will make it a world leader.

Think Australia’s first underground automated waste collection system and a high-speed fibre optic network that will enable everything from free wi-fi throughout the city centre’s streets, parks and plazas to smartphone apps that will allow drivers to find the nearest car parking space.

“We are laying the foundations for a city that will be the envy of many others in the future,” Mr Jamieson said.

“I often think of the criticism the original backers of the London Metro faced – they were ridiculed by people who said ‘we will never need that’.

“Now where would London be without the Tube?

“We have to be thinking well into the future.”

The next 12 months should also see plenty of groundwork laid for expansion of the airport into an international facility and plans to make the Sunshine Coast the connection point for a new submarine broadband cable that will link us directly with Asia, the Pacific and the United States.

Mr Jamieson said council had done a lot of work to make the cable plan a reality and he remained hopeful 2018 would be the year authorities approved a “protection zone” so it can be brought ashore here.

That, he says, will provide a significant incentive for businesses which require mili-seconds of advantage to be competitive in their fields.

“Again, there has been a lot of groundwork that people don’t see but I hope in 2018 we will have confirmation about the Australian Communication and Media Authority undertaking the Environmental Impact Study into bringing the cable to shore here and by the end of year announce the cable company or companies involved.

“So we will continue to build on the foundations which have been laid, not only in 2017 but for the past five years.

“People will start to see things happening on top of the ground as most of the action so far has been under the ground.”

But the challenge Mr Jamieson is keen to tackle in 2018 – and one the general public will notice is providing adequate public transport.

While it is a State Government responsibility, he said council had very clear ideas on what was needed.

“People can’t help but have noticed the increasing congestion on our roads, so we really need a mass mover of people that people have confidence in and light rail is council’s preferred option,” he said.

“Over 90 per cent of trips on the Sunshine Coast are intra-Sunshine Coast, so less than 10% are people who travel are leaving the Coast to go somewhere else.

“We would like to see a plan established through the State Government, with backing of the state reps on the Sunshine Coast, for a long-term public transport solution.

“It is one of the really big challenges we will face in 2018 and beyond, because without that critical piece of infrastructure we will be really challenged.”

Mr Jamieson said council had a “very strong economic agenda” but the focus for much of the past five years had been playing catch-up.

“We are now getting into a position where we can launch into the future,” he said.

“We can’t ignore the fact that more and more people are going to move into this area and we need to have a plan for them to have jobs, to have somewhere to live and to successfully assimilate into our community.

“And I want their kids the kids of the future – to be able to stay here and work here, which is something they haven’t been able to do for a long time.

“I think 2018 will be a continuation of building on the foundation stones we laid in 2017.”

“I believe we will continue to see really strong employment and growth as the rest of Australia wakes up to the fact the Sunshine Coast is much more than a favourite holiday destination.

“That we are increasingly becoming one of the economic and investment powerhouses in the country.