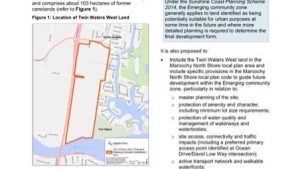 A Final decision on the Sunshine Coast Council’s proposed Twin Waters West planning scheme amendment is now months away after the State Government ordered an independent review of flood modelling and data used in support of the proposal.

A Department of Infrastructure, Local Government and Planning spokesperson said the review had been commissioned to ensure the proposed amendment reflected the state interests in relation to flooding. “The review is expected to be completed in the coming months.” Concerns have been raised about the potential loss of 1.5 million cubic metres of flood storage on the flood-prone 104ha land parcel north of the Maroochy River and east of the Sunshine Motorway.

A council spokesperson said it was confident in the flood model it used as part of its proposed planning scheme amendment but that it supported the State Government decision to commission an independent peer review. “The flood model used as part of the proposed planning scheme amendment for Twin Waters West was taken from council’s regional flood model, a sophisticated model that considers Maroochy River flooding, local area flooding, storm tide conditions and future climate,” the spokesperson said. “The flood model also incorporates the Sunshine Coast Airport Expansion Project and makes allowance for the future fill requirements of development on the North Shore.”

Council’s modelling has been called into question by consulting hydrologist Malcolm Brassey who says it is fundamentally flawed. Mr Brassey said council officers had revealed at a May meeting that the model had not used the highest astronomical tide coupled with storm surge to assess suitability for urban development. He said he had written to the council after the meeting to determine what tide levels had been used but the question remained unanswered.

Dr Claudia Baldwin, a planning expert and foundation member of University of the Sunshine Coast Sustainability Research Centre, praised the State Government’s decision to review the flood data. “This is encouraging because it shows community and expert comments may have had an influence,” Dr Baldwin said.
(Source: Sunshine Coast Daily, 6 July 2017)