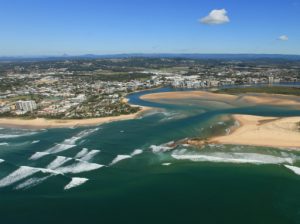 THE Sunshine Coast Council will seek community input from across the region on a proposed rock wall at the Maroochy River mouth.

Five consultation dates have been locked in through August, with residents of Coolum, Caloundra, Maleny and Nambour to be canvassed on their opinions, along with Maroochydore locals.

Two-hour consultation sessions will be held at each of the five towns, to discuss the best option for the existing sandbag groynes.

Among the options being considered is a 200m rock wall proposal which has been met with some strong opposition from the community, as well as a number of high-profile sporting and political identities.

Meanwhile the chair of the newly established Maroochy River Estuary Consultation Group has been announced, with the group to be independently chaired by Professor John Martin, Emeritus Professor at La Trobe University.

Prof Martin has worked with the former Caloundra and Maroochydore shire councils and has extensive experience working with local governments across the country.

“His experience also includes working as a Director of La Trobe University’s Centre for Sustainable Regional Communities, so he has a keen appreciation of the need to balance the environmental, economic, cultural and social values associated with the Maroochy River entrance,” Sunshine Coast Mayor Mark Jamieson said.

One of Prof Martin’s first tasks, along with a council staff member and a representative from the Mayor and CEO’s office is to assess expressions of interest for a range of positions on the consultation group.

That process was expected to be finalised in a “matter of weeks”.

Prof Martin was looking forward to helping the council shape its policy response to “an important coastal management issue”.

“This is an issue that countries all over the world are grappling with, and the policy decisions that come out of this process will shape the future of the Sunshine Coast,” Prof Martin said.

Cr Jamieson said he knew a “lot of people are very passionate about this issue” which was it was important to present “clear, accurate, evidenced-based information to the community”.

“Our council wants to ensure the community has access to all the key information including project costs and the range of social, environmental, cultural and economic factors associated with the options under consideration,” Cr Jamieson said.

The members appointed to the consultation group will be on a strict charter, with all media communication to come through the chairperson “through media statements jointly prepared and endorsed by the Chairperson and Council’s Communications Branch”.

The group charter states the council can, at any time with written notice, bring an end to the group.

The consultation group will be made up of the chairperson, divisional councillor, representatives from the Departments of Agriculture and Fisheries, Environment and Heritage Protection, Maritime Safety Queensland and Infrastructure, Local Government and Planning.

The Maroochydore Chamber of Commerce, University of the Sunshine Coast and Surf Life Saving Queensland will also be represented while there will also be “up to three” community representatives and estuary interest group representatives (eg. surf clubs, indigenous and environmental).

A report will be presented to the council in December based on advice from the group, as well as “direct community feedback” on the Maroochy River mouth groyne plans.