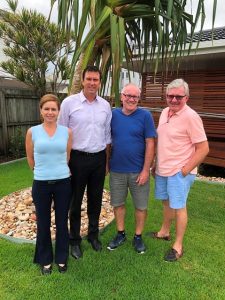 Kathryn Hyman (OSCAR), Bob Joubert (PSRA) and Greg Smith (OSCAR) met with Dan Purdie on 18 April 2018. The meeting was a very useful initial face-to-face with the new Queensland State Parliament Member for Ninderry; Dan was generous with his time and very open to our views on a range of issues.

We congratulated him on his election and appointment to the LNP Shadow Ministry. We also expressed our pleasure that he was a member of the Economics and Governance Committee of State Parliament – this is the committee that has oversight over most of the legislation relating to local government in Queensland.

We put OSCAR’s position on the following issues that are currently before State parliament as a result of the Crime and Corruption Commission’s Operation Belcarra:

We then discussed our desire for reform of Right To Information legislation to make it more accessible and less costly, particularly for voluntary, not-for-profit organisations such as OSCAR and its members.

Another issue raised with Dan was the use of confidential sessions in our local councils (since April 2016 there have been 13 closed sessions in Noosa, compared with 144 in the SCRC). We told Dan there is a need for changes in the Local Government Act and Regulations to reduce the use that councils can make of confidential sessions and to improve the reporting of the decisions made in such sessions.

We also discussed the ECQ Electronic Disclosure System and the way in which donations made to electoral candidates for local and state government positions are recorded on it.

Dan gave us a very good hearing on those issues (without making any significant commitments of course) and we will continue to work with him in the hope that we can find areas of mutual agreement that might result in beneficial reforms in these areas.

The meeting concluded with brief discussion of some issues of concern for OSCAR members or associates:

Dan indicated that he was following up with the SCRC on the independent review and safety audit of the Doonan Bridge Road construction by Projex Partners for the SCRC. Kathryn pointed out some issues in relation to the Twin Waters West development proposals and Bob reminded Dan of the problems being experienced with developer Aveo Group by the residents within the Ridges part of Peregian Springs relating to management of the bodies corporate in the Ridges; this is an issue that Dan has been looking at on behalf of the PSRA since prior to last year’s state election.

We look forward to an on-going and productive relationship with Dan.